Today being the 7th day of the Jewish month of Adar, we read Bible Portion (Parasha) 37, named "Shelach Lekha" (which means, "Send for yourself").

Parasha 13 includes three chapters in the book of Numbers chapters 13, 14 and 15, beginning with "Send (for yourself) men that they may spy out the land of Canaan which I give to Israel." 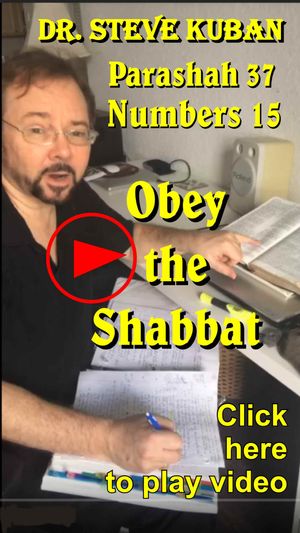 We know this familiar story. The spies are chosen, a leader from each of the 12 tribes of Israel, who went for 40 days to see all the wonderful blessings of the Promised Land. They brought back glowing reports of how blessed the land was, even bringing back huge clusters of grapes, and all agreed it was a blessed land that flowed with milk and honey.

30 Caleb stilled the people before Moses, and said, “Let’s go up at once, and possess it; for we are well able to overcome it!”

31 But the men who went up with him said, “We aren’t able to go up against the people; for they are stronger than we.”

Joshua and Caleb, the two spies who came back with the good report, tried to pursued the Israelites to move forward in faith and possess the land YHVH has promised to give them! But the Israelites would have nothing to do with that. They complained that God had brought them into the wilderness to die, and they tried to raise up another leader who would take them back to Egypt. They even wanted to stone and kill Joshua and Caleb.

Numbers 14:10 But all the congregation threatened to stone them with stones. YHVH's glory appeared in the Tent of Meeting to all the children of Israel. 11 YHVH said to Moses, “How long will this people despise me? How long will they not believe in me, for all the signs which I have worked among them? 12 I will strike them with the pestilence, and disinherit them, and will make of you a nation greater and mightier than they.”

21 but in very deed—as I live, and as all the earth shall be filled with the Lord’s glory— 22 because all those men who have seen my glory and my signs, which I worked in Egypt and in the wilderness, yet have tempted me these ten times, and have not listened to my voice; 23 surely they shall not see the land which I swore to their fathers, neither shall any of those who despised me see it. 24 But my servant Caleb, because he had another spirit with him, and has followed me fully, him I will bring into the land into which he went. His offspring shall possess it.

37... those men who brought up an evil report of the land, died by the plague before YHVH

38 But Joshua the son of Nun and Caleb the son of Jephunneh remained alive of those men who went to spy out the land.

Then in chapter 15 YHVH gives directions about the sacrifices that Israel SHALL give to Him, once they come into the Promised Land (which would be in another 40 years).  He looks beyond the next 39 years (as every person from that generation dies in the desert) and gives instructions for what the next generation (those who were under 20 years of age) are to do once they possess the Promised land.

Then YHVH warns the people of the consequences of disobedience to His laws:

30“‘But the soul who does anything with a high hand, whether he is native-born or a foreigner, blasphemes the Lord. That soul shall be cut off from among his people. 31 Because he has despised YHVH's word, and has broken His commandment, that soul shall be utterly cut off. His iniquity shall be on him.’”

What is the punishment for disobeying YHVH? Well, we see a very clear example in verse 32:

HOW IMPORTANT IS IT TO OBEY THE SHABBAT?

Numbers 15:32-36 While the children of Israel were in the wilderness, they found a man gathering sticks on the Sabbath day. 33 Those who found him gathering sticks brought him to Moses and Aaron, and to all the congregation. 34 They put him in custody, because it had not been declared what should be done to him.

One may wonder: "Why in the world would the LORD mete out such a harsh punishment to the man who simply broke the Shabbat?"

The answer is simple: To make the point so that all Israel realizes how serious it is, to transgress God's commandments, including breaking the Sabbath!

It is said that if you want people to obey a certain law in society, then law-givers must impose strict and harsh penalties for violations.

Take seat-belts. They are good for us. 90% of injuries in car accidents will be lessened or avoided altogether if passengers wore seat belts. So society in these current days impose penalties for violating the seat belt laws. Now, if it's only $50 penalty, the people who are thick-skulled and don't realize that they SHOULD  wear their seatbelt for protection, with or without a law, well...many of them will 'take the risk' and choose not to wear their seat-belts. After all, what's a $50 penalty?

BUT if the fine is increased to say $5,000, then society in general will buckle up. Because they don't want to risk that large a fine.

The point is, when society wants its members to do what's good and beneficial (and will save millions of dollars in hospital costs and lost lives), its lawgivers impose stricter penalties in order to get people to comply, and to reinforce the fact that is a serious thing to not violate that law

So what YHVH did — knowing that the Sabbath is GOOD for man to obey, that it will keep him focused on the preeminence of his Creator, and will keep him healthy and in balance — He imposed a very strict penalty for breaking the Sabbath.

Then YHVH declares something that will help the children of Israel to remember to obey His commandments:

37 YHVH spoke to Moses, saying, 38 “Speak to the children of Israel, and tell them that they should make themselves tassles (tzitziot, Hebrew צִיצִ֛ת) on the borders of their garments throughout their generations..., that you may see it, and remember all YHVH’s commandments, and do them; and that you don’t follow your own heart and your own eyes, after which you used to play the prostitute; 40 so that you may remember and do all my commandments, and be holy to your God. 41 I am YHVH your God, who brought you out of the land of Egypt, to be your God: I am YHVH your God.”

The wonderful thing about knowing Yeshua, is that HE is the embodiment of the Torah! When He was on earth He obeyed the Torah. He fulfilled the Torah.

And when we allow Him to rule in our lives, we are actually obeying the Torah of YHVH. For He will always help us to obey the eternal laws of God.

When we invite Him to have rulership in our lives, He writes the Torah into our hearts! So that we DO God's will and obey His eternal laws. And that includes the 10 Commandments. And a whole lot of other regulations that are GOOD for us! (like the dietary laws).

If anyone tells you that it's okay to break some of the 'nine commandments', like killing another human being, or stealing, or bearing false witness, or having sex with someone else's spouse, they are WRONG. If anyone tells you that it's fine to eat swine, or eat blood, they are wrong. It's not fine. It's not healthy for your body. And it's against God's Torah.. And if someone tells you you don't have to honor the LORD's fourth commandment, to KEEP the Sabbath...they are wrong. For God has clearly spoken this commandment in numerous times throughout His Torah, and His entire Word. The early believers in Yeshua all kept the Shabbat and the dietary laws. And no, the sabbath didn't get changed to Sunday, even though a man (be it your neighbor or the Pope of the Catholic Church) decreed it as such.

You see, at it's core, we are selfish. And as fleshly beings, sometimes we just prefer to "do our own thing" rather than obeying YHVH's Word. Paul speaks of this in Romans 6-8.

But if we "put on Christ" and read His Word and apply it; if we put HIS WORD on, as our Armor; if we allow Yeshua and His Holy Spirit to come inside of us and LIVE HIS LIFE THROUGH US — then we will obey the Torah, and honor God -- and it will be better for our dies, better for ourselves, our close loved ones, our friends, and even all society. And we will honor the LORD and His TORAH.

Shalom my friends. May YHVH our Elohim (our God) bless you!

Kindly consider helping us continue to create new music for our Lord, by donating at

We rely upon the gracious assistance of our friends and supporters who undergird our ministry and mission through their prayers and financial assistance. Thank you so very much.